Logan decided that he wanted to be a red shirt for Halloween this year.  Easy enough.  I’ve got this one! Years of Star Trek experience has led me to this point in my life!

First was finding the shirt, I chose this one on Amazon. Most of the reviews were right.  The shirt does run small around the torso and long in the arms.  However, the adult men’s small size worked for a very skinny 12-year-old. Shirt acquired, Logan thought it would be funny to add tribbles to the costume.   How awesome is that?

I wasn’t going to shell out $20+ each for a ton of tribbles.  So I found this easy pattern on Craftster.  I pretty much just scaled the pattern to about how big I thought most should be, and then cut the fabric either smaller or larger to give my tribbles some different sizes. Pattern in hand, it was time to find some fur.

Buying the fabric was fun.  Not.  Jo-Anne’s Fabric actually had several kinds to choose from.  So the costume wouldn’t be too crazy, I chose two different fabrics I thought looked good together.  I got 1/4 yard each.  It was folded over and is enough to make a ton of tribbles. While shopping, I also found some grey IKEA ornaments that looked amazingly like tribbles.  Not sure if they’ll make the final costume yet! 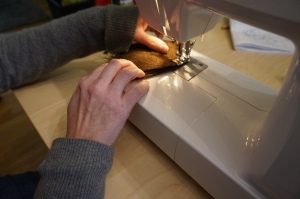 Since the pattern instructions are already handy, I won’t rehash that here.  But here some things to keep in mind to make it easier! 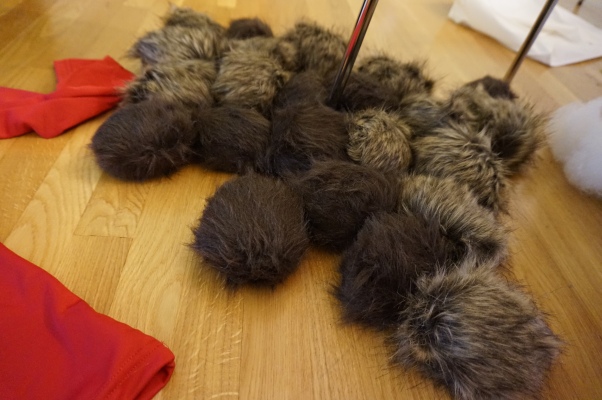 For the grand finale, I tried used clear thread and just basically looped a bit through the fabric of the red shirt and the tribble. Then tied a knot.  The clear thread is made of Nylon and doesn’t knot very well. So, I ended up switching out and using traditional brown thread instead.  That decision saved my sanity a bit as it is much easier to see!  I did two loops for each just so they wouldn’t be flopping around too much.  I tried to put them on so it looked like they were falling on him from above.  There is even a couple on his back and a few on his treat bag!  I ended up not using the grey IKEA ornaments.  They were just too much of a contrast to these, plus I only had four.  How sad for me, I just have to use them as Christmas decorations!