Last year we helped the LHMS Robotics Team put on their 1st Annual Text Adventure Game Jam. The students in attendance learned a lot about Java programming and what goes into making a video game. The competition follows FIRST’s format for the Lego League competitions. The winners received trophy’s I created. We’re doing this same thing this year, but mixing it up a little bit.

The game jam has three categories to compete in and an overall winner. The categories are:

You can learn more about the game jam at the NOVA Text Adventure Game Jam Blog. Last year, each team that won a category and the overall winner received a trophy.

Four our robotics events in the past, we’ve been using Cassel’s Sports and Awards out of Herndon, VA to get our trophies. I can’t say enough good thing about them. They’ve managed to knock it out of the park for us on deadlines and creativity for our awards, but – they don’t have a java trophy. Who would have a java trophy? The Internets were not much help either, so we had to make our own.

Utilizing, the engineering principle espoused most, KISS (Keep It Simple Silly) the trophy was a simple 2D design. We’d use a picture of Duke and put text in the middle of his body (I’m sure he likes tattoos!). I’d love to attribute where the vector art is from, but sadly I got it from a repost. Someone must have created it a long time ago when Duke was still remotely popular. Don’t ask me why he fell out of favor, maybe Oracle has no love for cute icons. 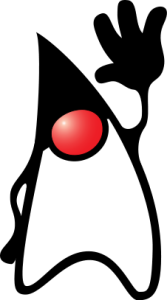 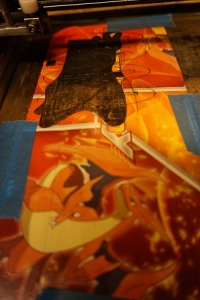 Next the plexiglass needs to be gut down to size. A radial saw is the best way to cut it. I’ve tried using a bunch of different cutters – heavy scissors &”plexi-glass cutters” – all of which made the plexiglass crack. The overpowered radial saw, however, works well to cut plexiglass down to size – without cracking it in the process.

Plexi-glass in hand, it was time to start cutting. Nothing goes right the first time though, so I always run a test cut first. In this case, it worked perfectly right off the bat! So much for test cuts! I did play around with the first cut, and you can see here the effect of moving your material in between cuts. Notice how there is one Duke inset within the other. You’ll also notice that the plastic wrap is still on the plexiglass. That’s kept on the plexiglass to protect it from the fumes when the cutter is burning. Only after the cut is finished does the plastic wrap get removed.

Some of the cuts with the laser cutter did not make it all the way through the trophy. This happens when the bed isn’t level or the laser isn’t focused properly. The beam loses intensity as it goes over the wobbly medium. When that happens, you do have to pull out the “plexiglass cutter” and get to work. Just follow the outline with the cutter a few times and you can feel it pull apart. With enough times tracing through you’ll have it apart in no time.

In the end, the trophies came out alright. The tongue-in-groove design was a little loose, but it seemed to work. The students enjoyed the award and the event was a great success.